The «Police Politique» project started as an impromptu performance art intervention that was repeated several times between April 2015 and May 2016. These were followed by a series of 145 photo portraits I took of people wanting to join the project’s newly created Fraternity Against Political Police. The portraits were later combines with photographs and video of the street performances as an installation within the Art&Anarchy Exhibit, May 2017.

On April 2, 2015 — at the 75k-strong anti-austerity demonstration in Montréal, I found a discarded protest sign that lay in the mud in Square Victoria. The cardboard protest sign is hand-painted in three colours. It has an armband taped to its back side that I slid around my forearm to reveal is as a shield.

According to an individual I met during the demo, the “PolicePolitique” shield “belonged to a girl from Université de Sherbrooke who came to the Montréal demo on bus #4”. Why the protest sign was abandoned is unknown.

I decided to honour the shield’s initial purpose and carry it in the demo. What better role could an oppositional artefact have than to be back on the streets? The Police Politique protest shield was carried in subsequent demonstrations but I am taking the concept a bit further. Police brutality and protest repression has become commonplace in Montréal. The gratuitous violence grows in intensity and is encouraged by the current government and most corporate media editorialists in their collaborative effort to denigrate the oppositional movement against austerity. The police are political. Political profiling against oppositional movements in Québec became obvious in 2012. As a result, it seems entirely appropriate to continue carry the shield during protests to highlight this fact.

The goal is to (re)mediate the shield into a photographed performance of me with the shield alongside police during demonstrations. The task was to encourage people to take photos of me with shield and to share the photograph online through social media using the #PolicePolitique. The photographs shown below.

This photo portrait project uses found oppositional artefacts : the “Political Police” shield, a plastic Anonymous mask, a paper mask representing anarchopanda worn to contest bylaw P6, the red tuque of the Montreal Police Fraternity (MPF) and the black flag they often hung from patrol car windows. All were acquired during demonstrations in Montréal.

The (re)mediation and the combination of these four or five oppositional symbols transforms them. Their combination mingles police and political repression of the struggle against austerity and the police to protest against that same.

The MPF tuque is a symbol that blends the Fraternity’s fight against austerity to preserve their pension fund from government cuts, as well as a symbol of police repression. The Montréal police wear this tuque (as well as a variety of camouflage pants) as a pressure tactic, while they kettle protestors and make mass-arrests during Printemps 2015 demonstrations against the same austerity measures they themselves oppose. During the May 1st demonstration in Montréal, I found the MPF car window flag, I later included in the portrait series. 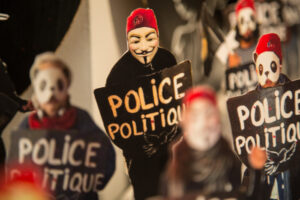 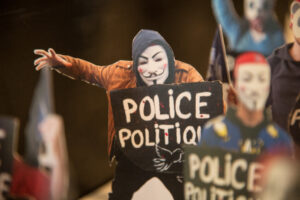 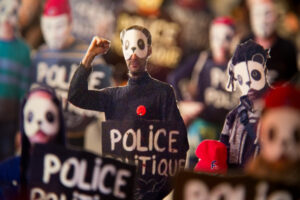 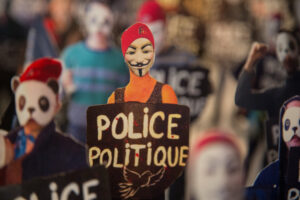 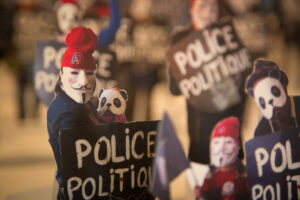 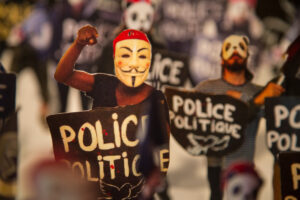 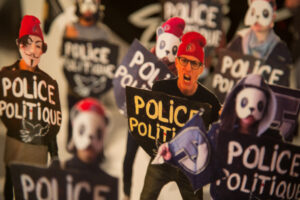 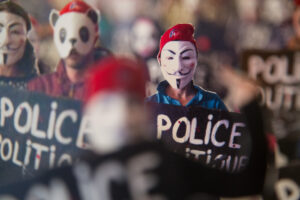 The Montréal police violently repress demonstrations against austerity (among others) while simultaneously opposing the negative effects of austerity on their own pension fund. In doing so, the Fraternité des policiers et policières de Montréal and its membership use political profiling as a pressure tactic and bargaining tool for their own self-interest.

This undisciplinary installation of 148 photo portrait prints, a video performance montage and protest sign reproductions juxtapose five oppositional artefacts : cardboard protest shield, plastic Anonymous/Guy Fawkes mask, paper Anarchopanda mask, as well as, the Montréal Police Fraternity’s red tuque and black flag. The interplay of these divergent artefacts reveal a narcissistic Montréal Police Fraternity and its corrupt use of protest (its own, as well as the protests of those they simultaneously repress) to gain political clout. The artefacts assembled and remediated within the installation were all acquired during demonstrations in Montréal since the “police politique” protest sign shield was found in Square-Victoria at the beginning of the anti-austerity demo on April 2, 2015. The street performances took place between April 2, 2015 and May 1, 2016. The performance’s red tuque and black shield are a foreground intrusion to the background actions of Montréal’s municipal police.

The police’s lame tactic of wearing their red tuque/cap during patrols actually opposes nothing. It seeks to consolidate power by maintaining the status quo. It is a public relations prop in an attempt to recover from their sullied reputation, using its corporate logo and red headgear as beacons of despair.